Many of you are asking us how to support that action for the victims the 709th air base. Here are some suggestions, but before your read them, here is an advice: be aware that authorities will move only when a substantial part of the population visibly shows anger. Such a visibility will be obtained only if each of us contributes. So, we advise you to regularly devote some time to the action (a quarter of an hour each week, for instance). This modest lapse of time may de devoted to write comments on local papers, Facebook pages, to send mails to acquaintances, to advertise this site, to contact your representatives, etc... Gather with other participants to do this, which will be more motivating.

• Don't struggle on your own

Single claims are usually a driver to temper discontent. Some of you call on the Authorities (the Mayor, the army representatives). Often the answer is "you will be the only one to complain", or that there have been very few complaints. In other words: the issue is You not Their doings! In actual fact, we are quite a number of affected people who deplore it. But fear of sticking out, frequent lack of support from our representatives (who have to face all kinds of pressure), fatalism ("there is nothing we can do"), the making you feeling guilty by the Authorities ("You would not like to put our defense at risk, would you ?") silence us or split us apart.

If you registered on this site, we make available to those who are interested the contact names near their place and affected by the noise pollution. In the meantime, talk you neighbors or distribute the home page leaflet in people's mail box. Advertizing that federating initiative is a good means to make contact.

Set up local associations ("Association du pays de ..") if you can (keeping in mind that an informal association will save you the administrative work load, provided you are not looking for a formal recognition). It is another means to regroup. Share your experiences by posting your successes or failures on this web site.

It is important to have available the everyday stories of the impacted people. Against the politically correct and sometimes trumped-up speeches and unawareness, those based-fact stories bring things back into place and allow everyone to realize one is not alone to suffer the pollution. Testimonials (written, footage, photos, letters .. we can help you getting them in shape) that will be communicated will only refer to the "Communauté de Communes" in order not to shed a light on your municipality and will be made anonymous. Also report on regular basis any pollution event: testimonies and reports are vital to establish the broadness of the impact of the air base operations, and will allow to unfold sound arguments on well-documented facts.

Make it known locally but also beyond: we aspire to federate all the impacted territories. Only unity can drive success. Division is counter-productive: advising pollutions would be ok in another neighborhood is not the plan. If you belong to a local association, we will name it on this site. Suggest a local representative to the collective: we intend to operate in a democratic and pluralistic way. Be aware that, on your own, your impact is very weak: we can be heard only by showing that we represent a large, united, collective action.

At a time when petitions flourish with a couple clicks, we are unsure about their effectiveness other than illustrating by the number of their petitioners the putting at risk of local public or economic interests. On the other hand, we are convinced that its image means a lot to the army authorities, given its yearly 40-billion-euro budget (ranking second in the country's budget and increased by 5%). In that context, it can be said that there is indeed a battle around the army image in the territories. Advertising this positive image is, in particular, the motivation for providing the regional press with contents on a regular basis from the base comamandment. If the origin of behaviors can be restored, we might be able to influence them. Notice also that the army advertises a lot (it can afford it): you too may contribute to inform, by systematically posting factual arguments on the web, in particular where the military and industrial lobby express. For instance, recall, when Pilatus 21 are advertised, how harmful they can be to the community when improperly used. If you intend to put a question to some representative, do it preferably in a visible manner, such as using a social network. Post your comments to the local newspapers (too often too kind to local announcers and news makers). Keep in mind that, now, only visible actions count !

Currently, the "Commautés de Communes" often represents the effective local power especially in rural territories, following town councils. The Communauté councils as the town councils are public. If you feel your voice is not heard, and without disturbing the Communauté councils, gather there with friends. When council closes, come forward to the representatives in charge of environment and explain that you will remain vigilant to their doings to protect all territories of the CdC. Ask for the topic to be scheduled on the next session's agenda. Ask to implement agendas and minutes and to publish them on line if not done: that is instrumental in the local democracy (be aware that CdC put on line minutes of regular meeting as they do for councils).

For effective action, we need to convince our representatives that current situation is not inevitable and develop an argument. You will realize that objections are always the same, therefore you can prepare responses.

About the necessity of "pounding" territories: The Tours base was relocated in Cognac, as the population would not stand anymore the nuisances from base 705. However, the zone now impacted is not a desert: it holds about 600 000 inhabitants, and one of its attactive characteristic is to propose a high environmental quality to them. The relocation, once again in Cognac, of the Cazaux base (representing some 50% more planes), only satisfies logistic and economic constraints, in particular enabling the maintenance of the planes by a privaye society (Babcock) on a single spot. Its consequence is again to focalise nuisances, a choice made by the military administration and the politics with a thorough knowledge. To these relocations, one must also add the creation of the Airbus pilot scholl in Brie-Champniers, which aims to train 200 pilots each year. So, everything sounds like it was decided to concentrate military and civil training activities in the region of Cognac-Angoulême, for economic purpose. These relocations - which evidently will have a strong impact on the population - did not trigger any known impact study, as if we were negligible quantities. State that the impacted population has a right to get an inventory of the present nuisances of of the ones to come, as well as a genuine concertation. This may be done in a transparent manner, creating a consultative environmental commission, at the initiative of the prefect of Charente, as is the case for other military bases. 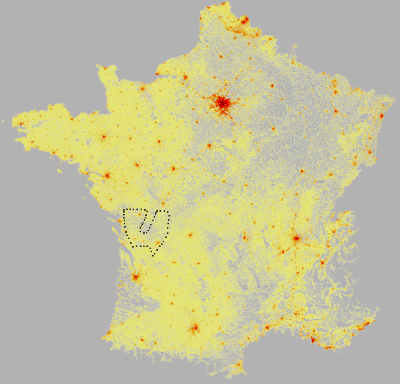 Population density. Dotted area is the main exercice
zone for Cognac base.

You will sometimes be told that overflights are not that new, and that the population could live with it since now. Underline that the transfer of the base from Tours, the use of the more noisy Pilatus planes (turbo-motors) with a larger autonomy, the shrinking of the area devoted to exercices, bring a radical change. Some already observe a nearly 50% increase of trafic over their heads. Moreover, the move of the Cazaux base will also occur soon to Cognac, which means 8 to 10 more Pilatus planes (potentially training foreign pilots, now) ! What could be accepted before might well become unbearable soon. Underline that training practices are not all the same, regarding the consequences for the population: at the present time, no serious guarantee is brought by the military administration, that most detrimental practices are really avoided; only vague assurances are given, often contradicted by facts, to the population as well as to not too demanding local politicians (see the BA709 item on this site).

You will often read that the base commandment advertises for 40% of ground flight simulator, thus without any annoyances. This saying is misleading: indeed, this does not at all implies that real flights volume decreases. Replacing AlphaJets with Pilatus PC 21 reduced the flight cost drastically (from 7800 € to 1500 € per hour), which opens the possibility to increase this volume. Notice that the commandment has never given any flight volume, neither past nor scheduled (and no journalist ever asked for it).

They will often argue the economic contribution of the base (what minister or congressman does not brag about the 130 million euros ?). It is a sensitive topic which has to be tackled from an accounting standpoint: there is no magic money. That money from the country's budget, that we all contribute to, is taken out of other spending lines such education, hospital, research, pensions, unemployment insurance, etc... If the decision to contribute to the military budget rather than some other is a political choice (we won't tackle this topic here, but we will make a note that local politicians often avoid it, "forgetting" that what they stand for on the one side, they have supported to collect it from the other side.), our contact can realize that the money which miraculously found in one of their pockets, came in fact from one of their other pockets! Still one is free to wish for a research center or a vaccine manufacturing site rather than a military base, especially if it is recalled that investments in education, clean energy or health creates more employment than military investments (in other words: military spending is not an efficient economic motor).

Underline the loss of attractiveness of the territories, especially when working from home is bound to expand (work that calls for a non-disrupted intellectual attention), damages the economy which is hardly ever accounted for (people from Tours was relieved with the school transfer, why should we be happier of the situation ?). Nor is the loss of real estate value taken into account, which impacts the inhabitants. While metropoles loose their attractivity, as the inhabitants turn towards middle size cities to regain a quality of life, the elected representatives who sell off the territories for jobs (which may be argued sterile, in the present case) use an out-of-date software.

The security argument (here again) is often used, stating that the base activity is essential to the protection of the french population. Underline that the protection of the actual french territory involves only 8 fighters, over 200. They may be used, in particular, to protect nuclear plants, although it has been realized that they are vulnerable to many other threats than attacks by aircrafts. These 8 planes are far to justify the formation of 30 pilots per year. Actually, the air force aims to train, in addition to the french ones, europeans and international pilots. The army clearly argues that it would help to sell the products of the french industrials. Justifying the existence of the aerial nuisances only to protect the country is thus extremely simplistic, and the general goals targeted by the army and the politicians, together with the impact on the population, must be entirely discussed.